Life Cycle of a Bill

The Legislature creates laws that represent the best interests of the citizens within each legislative district. Proposals for new laws are called bills. To become a law, a bill must successfully pass through a number of steps highlighted in the tabs below.

All legislation begins as an idea. Ideas can come from anyone. The process begins when someone persuades a Senator or Assembly Member to author a bill. Both Assembly Members and Senators are limited to introducing 40 bills per two-year session.

A legislator, who acts as the author, sends the idea and language for the bill to the Legislative Counsel where it is drafted into the actual bill. The California State Constitution provides that every act shall embrace but one subject and that subject must be expressed in the title of the measure. Also, every law must contain the enacting clause: “The people of the State of California do enact as follows…” The drafted bill is returned to the legislator for introduction. When the author wishes to introduce the bill, he or she delivers it to the Chief Clerk or Secretary who gives the bill a number. 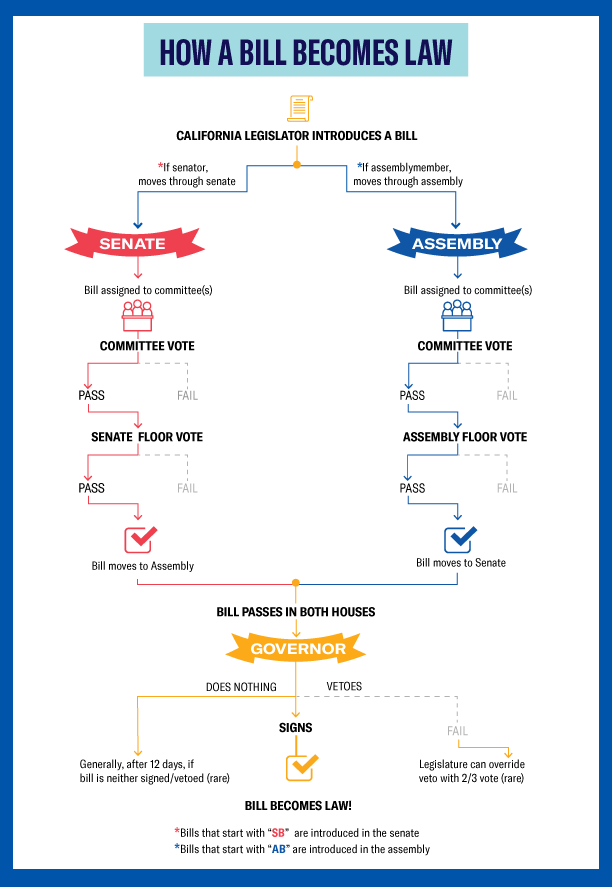 A bill’s first reading is when the clerk reads the bill number, the name of the author, and the descriptive title of the bill. Despite what the term might indicate, the entire text of the bill is not read on the floor. The bill is then sent electronically to the Office of State Printing. A bill must be in print for 30 calendar days, giving time for public review, before it can be acted on. There are exceptions to this rule: Budget Bills, bills introduced in an Extraordinary Session, and resolutions are exempt. A three-fourths vote of the members of the house which is considering a measure will dispense with the thirty-day requirement.

The bill cover shows the bill’s number, the date of its introduction and first reading, the committee to which it is referred, the dates it is sent to and received from the printer, as well as any other clerical notations made necessary by a deviation from the ordinary procedure. Assembly bill covers are white, while those used by the Senate are goldenrod. Covers for concurrent and joint resolutions and constitutional amendments are each of a different and distinctive coloring, providing the clerks with an easy method of identifying the various types of proposed legislation.

The bill then goes to the Senate or Assembly Rules Committee where it is assigned to the appropriate policy committee for its first hearing. Bills are assigned according to subject area. During the hearing, the author presents the bill, people testify in support or opposition of the bill, and the Committee acts on the bill. The Committee can pass the bill, pass the bill as amended, or defeat the bill. It takes a majority vote of the membership of the Committee to pass a bill. Bills that require money must also be heard in the Fiscal Committee, Senate and Assembly Appropriations.

Bills passed by committees are read a second time in the house of origin and then placed in the Daily File for a third reading. If a bill is reported without amendments, it is read the second time, and then sent to the Engrossing and Enrolling office, where the printed bill is compared with the original bill and, after comparison (called engrossing), the bill is returned to the Assembly or Senate third reading file. In the event that a bill has been reported out of committee with amendments, and these committee amendments, or amendments offered from the Floor, have been adopted on second reading, it is reprinted, showing such amendments by the use of strikethrough type for matter omitted, and italic type for the new matter.

If a bill is amended in the second house, it must go back to the house of origin for concurrence, which is agreement on the amendments. If agreement cannot be reached, the bill moves to a two-house conference committee to resolve differences. Three members of the committee are from the Senate and three are from the Assembly. If a compromise is reached, the conference report is voted upon in both houses.

If a bill presented to the Governor contains one or several items of appropriation, he or she may eliminate or reduce any or all of them while approving the other portions of the bill (known as the line-item veto). The items then may be separately reconsidered and the vetoes sustained or overridden in the same manner as bills which have been vetoed in their entirety by the Governor. The Legislature has 60 calendar days to act upon the veto.

Most bills, whether signed by the Governor or passed as a result of an override, go into effect on January 1 of the next year. Urgency measures take effect immediately upon being signed by the Governor and chaptered by the Secretary of State. Urgency bills affect the public peace, health, or safety and require a two-thirds vote for passage.

When the Governor approves a bill, he or she signs it, dates it, and deposits it with the Secretary of State. This copy is the official record and law of the state. The Secretary of State assigns the bill a number known as the chapter number. The bills are numbered consecutively in the order in which they are received, and the resulting sequence is presumed to be the order in which the bills were approved by the Governor. Each approved bill is stamped with the Great Seal of the State of California.