The rapid growth of the state and expanding government responsibility soon created the need for additional space at the Capitol. After several major expansion efforts and three-quarters of a century, issues arose concerning the structural integrity of the building. California had to make an important decision – rebuild or restore?

Throughout its history, the California State Capitol building has experienced growing pains associated with the continual expansion of a prosperous state.

By the early 1920s, California’s State Capitol building was nearly out of room and expansion was desperately needed. In response, an impressive structure was designed and built so the California State Library and Courts could be moved off-site. The exquisite building was completed and occupied by 1928 and is part of the Capitol Extension Group located adjacent to the Capitol. This group also includes the architecturally similar State Office Building No. 1 and the fountain that sits between the two buildings.

The building’s pediment and Neo-classical design complimented the Classical Revival style of the Capitol. The Library and Courts’ new home was designed by the San Francisco architectural firm, Weeks & Day. At the time of construction, the building was widely regarded as the most beautiful in state government. Even today, the grandeur of the entrance lobby, its majestic murals, and a variety of attractive decorative features make this building exceptional. 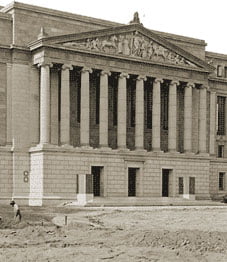 In 1928, the State Controller’s Office moved into the semicircular apse when Library and Courts vacated the space. The Apse was a major architectural element based on early Roman design and originally housed both the State Supreme Court (first floor) and the State Library (second floor). The Apse was demolished in 1949 to accommodate the East Annex expansion. 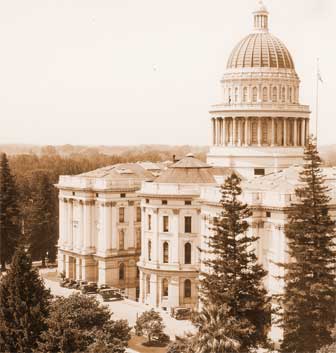 Construction of the East Annex began in 1949 and was completed by 1952. The East Annex created offices for the Governor, Lieutenant Governor, legislators, and other state officials. Before the expansion, Assembly and Senate members had to carry out business on the floor of their respective chambers, or any other place they could find space. 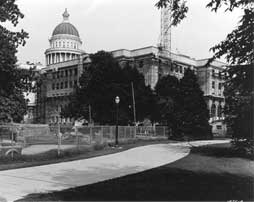 Since it became a state in 1850, California has grown faster than many nations. The Gold Rush in 1848, the transcontinental railroad completion in 1869, and the 1950s post-World War II baby boom are just a few of the events that led to the rapid increase in California’s population. Accompanying this increase was a struggle for change within the Capitol as the building became too small to house all of the state’s government.

The West’s first great architectural monument was the California State Capitol in Sacramento. Its historical integrity and symbolism has been continually at odds with the government’s need for expanded space and modern amenities. To accommodate growth, the Capitol has undergone a number of remodels during its lifetime. The first began in the 1890s, fewer than 30 years after its opening, and saw the grand staircases replaced by office space, the installation of modern necessities (central heating, ventilation, plumbing, and elevators), and the addition of a new fourth floor.

In 1949, the circular Apse on the east side of the building was demolished to make way for the East Annex. The East Annex was built to accommodate the expanding need for greater office space.

By 1972, the state had once again outgrown its Capitol building. The structure was deteriorating and becoming unfit for its purpose. A seismic study revealed that the Capitol would be unsafe in an earthquake. It became time for California to make an important decision – rebuild or restore? 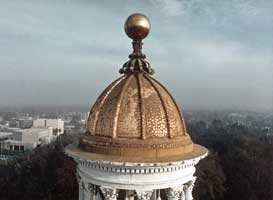 The phenomenal growth and complexity of the California state government soon crowded the Annex and, by 1970, many legislators were convinced that an entirely new Capitol was needed at a different location. That idea went forward to the point that working drawings were created and plans were submitted for modern towers. These proposed towers would have been built on the same site as the original Capitol building. In July 1974, leadership in the legislature changed hands, and Speaker Leo McCarthy proclaimed that there would be no new Capitol: The original would be restored. Solidifying this statement, Assemblyman Leon Ralph and Senator Lou Cusanovich authored bills AB2071 and SB1547 that called for the structural and aesthetic restoration of the Capitol. These bills were passed in 1975 and 1980, respectively. 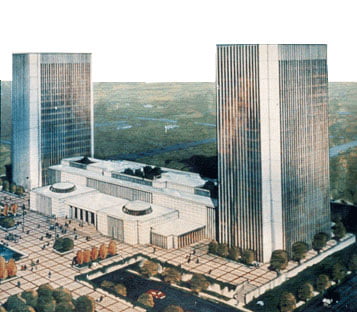