“On this spot the people of California are building a memorial to honor those firefighters who lost their lives protecting our neighborhoods, our homes, our families and our dreams.“

The California Firefighters Memorial in Capitol Park serves as an enduring remembrance of the men and women who lost their lives while serving on California’s front lines of public safety. The state depends on firefighters to ensure Californians’ security. Whether battling a structure blaze, handling hazardous materials spills, or as first responders in the face of natural disaster, the firefighters’ workplace is challenging, dangerous and, many times, unforgiving. A firefighting crew embodies the true spirit of self-sacrifice each time it answers an alarm, as the families and friends of those whose names are immortalized on this monument know all too well. With its bronze statues and limestone memorial wall, the monument honors the more than 900 firefighters who have died in the line of duty since California achieved statehood in 1850.

The idea for this memorial came to California Professional Firefighters (CPF) President Dan Terry in 1992, as he attended a ceremony at the International Association of Firefighters Memorial in Colorado Springs, Colorado. “I just kept thinking about all the families who would never have a chance to go to Colorado. They deserved a memorial in the state where their loved ones worked,” said Terry. Terry worked with CPF Governmental Advocate Brian Hatch and California Assemblyman Rusty Arieas to steer a bill through the Legislature that would bring his vision to life. Governor Pete Wilson signed Assembly Bill No. 3198 on September 29, 1992, stipulating the creation of the Firefighters’ Memorial Task Force. This task force was entrusted with choosing the perfect location for the memorial in Capitol Park while preserving the historical integrity and natural beauty of the park’s grounds. The location near the center of Capitol Park was dedicated on May 31, 1995. 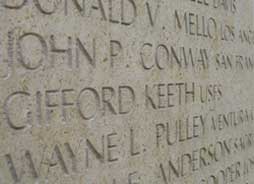 With one hurdle conquered, the next challenge was to secure funding to build the structure. In 1993, Governor Wilson signed two bills that would help CPF acquire the funds needed to build the memorial: the California Firefighters’ Memorial Income Tax Check-off, and the California Firefighters’ license plate. The income tax check-off provided a way for all Californians to honor their state’s firefighters by choosing to donate a portion of their expected state tax refund to the memorial.

The focal point of the memorial is the polished limestone wall that immortalizes the names of California’s fallen firefighters. The wall bore 855 firefighters’ names at the time of the memorial’s unveiling. Blank panels serve as a somber reminder of the losses yet to be felt by the loved ones of firefighters who do not return from the call of duty. The wall is flanked on either side by bronze replicas of firefighter helmets and jackets, called turnouts. This is a reference to the long-held firehouse tradition of leaving the coat and hat of an off-duty firefighter hanging untouched until they return to duty.

There are few professions in which co-workers’ lives depend on one another. The sculpture “Fallen Brother” depicts the sorrow felt by a firefighter as he retrieves his lifeless comrade from the flames. Artist Jesus Romo, a veteran of the Sacramento City Fire Department, was inspired to create this homage to the fellowship of firefighting by his passion for his work and the losses he has felt personally during his lengthy career. San Francisco Fire Captain Gerry Shannon was given the honor of posing as the model for the struggling firefighter. Shannon displayed heroism during the 1989 Loma Prieta earthquake by rescuing a woman who had been trapped in a collapsed building in San Francisco’s Marina District.

The sculpture “Holding the Line” pays tribute to the profession’s spirit of teamwork, focus, and dedication. Three firefighters are charged with feeding the hose line up to the fourth who is holding the nozzle. Like Jesus Romo, artist Lawrence Noble chose to immortalize actual firefighters as models for his work: Chief Rose Conroy of the Davis Fire Department, the first woman ever to be named chief of a professional municipal fire department in California; Kenny Enslow, who lost his life fighting a forest fire in Mendocino County; Captain Steve Bowie of the Los Angeles County Fire Department; and Frank Reynoso, also of the Los Angeles County Fire Department.

On April 6, 2002, the California Firefighters’ Memorial was officially unveiled. The families of fallen firefighters were invited to Sacramento to honor their lost loved ones and share their memories with others. Governor Gray Davis, along with CPF President Dan Terry, joined more than 2,000 uniformed firefighters to honor their lost colleagues. This emotional event was followed by the First Annual Ceremony on May 22, 2003, which honored those who lost their lives during the year following the memorial’s dedication.

For more information about California’s firefighters and the California Department of Forestry and Fire Protection, visit the CDF Firefighters website.