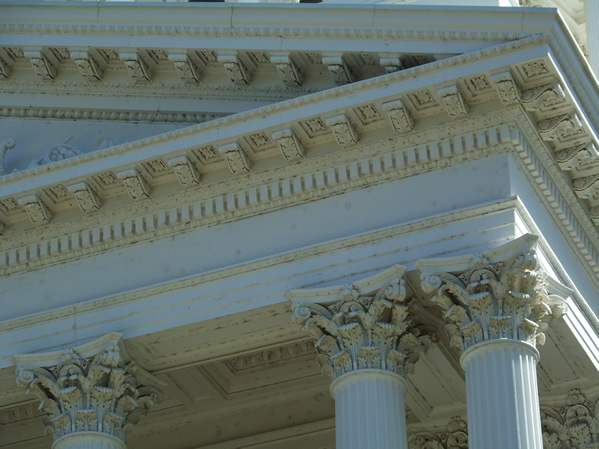 the Governor, the executive branch is responsible for administering and enforcing the laws of California. The Governor has the power to fill vacancies in judiciary offices as well as other state offices.

The judiciary branch of government is responsible for interpreting the meaning of laws, applying laws to individual cases, and deciding if laws violate the State Constitution. The California Supreme Court’s decisions can only be reversed by the U.S. Supreme Court if they are in conflict with the U.S. Constitution.

by the people to a four-year term and if elected can serve a second four-year term. Only citizens of the United States that are residents of California and over the age of 18 can be elected as Governor of California. The Governor is the Commander and Chief of the militia of the state and is the sole official of communication between the state and the federal government and other states of the United States.

There are many state departments included in the executive branch. Officials who are publicly elected, appointed by the Governor, or hired into the state’s civil service system, direct these executive departments.

The legislative branch of government is composed of the State Assembly, the State Senate, and several other departments. Together they are the principle law-making powers in the state. The Legislature will propose, analyze, and debate over 6,000 bills in a single two-year session.

Prior to their election, Legislative candidates must be over the age of eighteen, United States citizens, a resident of California for at least three years, and live in the district which they represent for one year.

California’s court system is made up of the Supreme, appellate, and superior courts. The California court system serves as a check against legislative and executive powers by making sure those branches do not create laws that are in conflict with the state constitution. The judiciary is responsible for seeing that laws are justly and equitably applied in all matters brought before the courts. The Supreme Court is headquartered in San Francisco, however it holds sessions regularly in Sacramento and Los Angeles.

As the final interpreter of the laws of the State of California, its decisions may only be reversed by the U.S. Supreme Court where it is determined that the California law conflicts with the U.S. Constitution.

The Supreme Court is composed of a Chief Justice and six Associate Justices. When a vacancy arises on the Supreme Court, justices are initially appointed by the Governor. Thereafter the justices appear on the ballot at the statewide elections and are elected to 12-year terms. All appointees to the California Supreme Court must be a member of the California State Bar or served as a judge of a court of record of the State of California for ten years immediately preceding his or her appointment or election.