the oak tree that stands behind it honor the contributions, past and present, that California Indians have made to the state's history and culture.

For thousands of years, native Indians lived in harmony with nature on the land that would later become the state of California. The men fished and hunted. The women harvested seeds, dug roots, and gathered herbs. And each fall men, women, and children came together to gather acorns, an important source of food.

a family could harvest enough acorns to feed themselves for an entire year. Once harvested the acorns were dried. The women then pounded the acorns into meal Stone for Grindingfrom which they would make soup and mush, often using a rock like the one displayed in Capitol Park. Native Californians differ on the use of the name "grinding rock." Some prefer to call such rocks "pounding rocks," since acorns were really pounded into meal rather than ground. Acorns and FlourOthers call them "bedrock mortars," because the rocks served as a mortar against which women pounded the dried acorns using a stone pestle. This process left holes in the rock over many generations of use.

"From the village...to this boulder many women would come to sit and work. They sat and pounded, winnowed, gossiped, scolded children, pounded acorns until they had deep holes sculptured in this hard black bedrock outcrop." 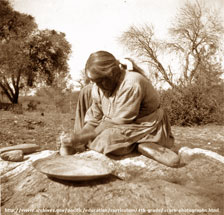 Making the acorn meal was a time-consuming and tedious job. To pass the time, women told stories and sang songs as they worked. The children who played nearby learned the traditions of their people through their mothers' stories and songs.

Today these traditions remain important aspects of California Indian life. Each year California Indians gather at Capitol Park's grinding rock to honor the oak tree and its food-producing ability. They conduct centuries-old ceremonies to pay tribute to their ancestors as well as present-day and future Indian people through dance, song, and prayer. In their homes California Indians still prepare and eat acorn mush using modern-day appliances and sometimes the traditional rock and pestle.