Four years after the architectural designs were approved, the construction of the Capitol building began. Floods, politics, labor issues, and other problems made completing the massive undertaking a formidable task.

Groundbreaking for the Capitol occurred December 4, 1860, but construction was not accomplished quickly. It took nearly 14 years and several administrations to complete the effort. Late in the year 1869, the Capitol was partially completed and able to accommodate the Legislature and several state officers including the Governor. However, it took five more years to finish the building. Many recurring obstacles hindered a speedy completion – funds, floods, construction problems, and political fights.

The Capitol was completed in 1874, with the cost of the construction totaling .5 million. The original budget provided in 1860 was 0,000. Incidentally, its completion also came at a high cost for one of its principal architects. In 1864, Ruben Clark was committed to a Stockton mental institution where he died in 1866. According to the hospital's files, the cause of insanity was diagnosed as "continued and close attention to the building of the State Capitol in Sacramento." Gordon P. Cummings took over as the supervising architect and completed the project.

The lack of a continuous and adequate funding source for the construction of the Capitol frequently hindered progress. Funds were provided by the Legislature that met for two months every other year. Building progressed until funds ran out, then stopped until the next legislative session.

In his annual address to the Legislature on January 9, 1860, Governor John B. Weller addressed the funding issue by saying, "It is believed that 0,000 will put up a wing sufficiently commodious to accommodate the Legislature and state officers." From this original estimate, the price tag eventually grew to .5 million. 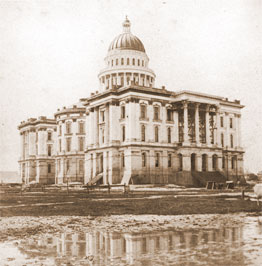 Beginning in December of 1861 and continuing into January, heavy rains and flooding from breaks in a levee of the American River created problems for the Capitol building project.

On January 6, 1862, the Legislature convened in the midst of this deluge. Four days later, the fourth in a series of floods hit. On January 11 the Senate passed a resolution to adjourn to San Francisco for the remainder of the session.

The Assembly did not concur and passed a resolution authorizing the Sergeant-at-Arms to hire boats to convey legislators to and from the Capitol, which was then located in the Sacramento County Court House at 7th and I streets. These proposals rekindled discussion about moving the capital to another location.

Ultimately, the rising water was too much for the legislators. They briefly adjourned and completed the session in San Francisco.

Work on the Capitol began again in August 1862. Construction crews hauled wheelbarrows of dirt to raise the building's ground line by six feet to protect against future flooding problems.

The original builder, Michael Fennell, who began work in 1860, was relieved of his duties when work did not progress on schedule. In August 1861, G. W. Blake and P. Edward Conner received the contract.

They immediately faced difficulties obtaining the cement and granite needed to continue the work. Then the 1861-62 floods brought work to a halt. One foot of water surrounded the building's walls and construction materials were destroyed. The builders requested an extension to their contract, but the Board denied it.

From that point onward, work on the Capitol was completed on a "day's labor" system. Supervising Architect Reuben Clark sought to avoid delays and political controversies by acquiring materials by contract and hiring all mechanics and laborers by the day.

While this construction method did not fully end the delays and controversies, it remained in effect until the Capitol was completed in 1874.

Well into the construction of the Capitol, political opposition by legislators, who wanted the permanent seat of the capital moved to another city, continued. 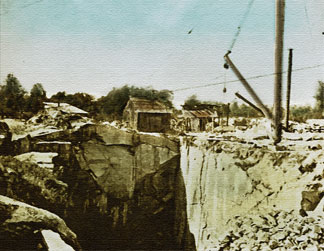 A close look at the western facade of the Capitol reveals two different types of granite: The grayer, darker granite is from the Folsom area; the lighter colored stone is from Penryn.

The original plans called for the exterior of the California State Capitol to be built of cast iron and stucco. In 1863 the supervising architect, Reuben Clark, suggested that stone was more suitable for a public building of such importance.

Taking Clark's recommendation to use stone, the Board of State Capitol Commissioners drafted a contract with a sandstone quarry in Yolo County to use its stone at a cost of 222. Upon inspection of the sandstone, the state geologist found that it was too dark and would not weather well. He considered granite a better choice for the project. He also felt it could be brought in from the Sierra Nevada by rail far more cheaply than the sandstone could be transported from Yolo County.

The story of the two granites used to build the Capitol became the story of the rivalry between two railroads – the Sacramento Valley and the Central Pacific. Both railroads were in fierce competition to be the first over the Sierra to link up with the transcontinental railroads coming from the East.

The granite for the first story of the Capitol was quarried in Folsom and transported to the building site on the Sacramento Valley Railroad. In February 1864, Reuben Clark found the Folsom granite unsatisfactory. He reported it difficult to cut because it was "of bad rift, with black knots, and by reason has caused us much expense."

At the time the Legislature was considering a bill to aid the construction of the Central Pacific Railroad. In return for receiving military and other transportation services, the railroad allowed free transport of construction materials to Sacramento. A granite quarry on the railroad line near Penryn would also be given to the state.

The state geologist gave the Penryn granite a favorable recommendation and encouraged the commissioners to open bids for quarrying the stone. On August 16, 1864, a bid of 58 cents per foot was accepted. Since the Folsom granite averaged 222.12 per foot, work on the facade stopped in November 1864. Only half of the Capitol's first story had been constructed. Three months later the first load of granite arrived from the Penryn quarry, and work began again on the first story.

As the San Francisco Mining and Scientific Press observed, "The granite seems to have been experimented with, as there are two kinds." 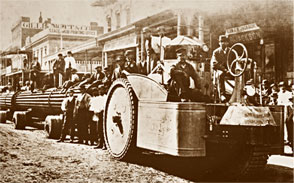 Each Roman Corinthian style column used to create the Capitol's portico and colonnade was 30 feet long, four feet in diameter, and weighed eleven and a half tons. Arriving either by water or rail, the columns were hauled from Sacramento's waterfront to the building site by a steam-powered tractor. This "modern" machine of 1871 moved at a rate of approximately one mile per hour over the 0.75 mile route.