By the early 1900s, the California State Library, located in the Capitol Building since 1869, and other state departments were in critical need of space. In 1906, the Capitol underwent a remodel and added a fourth floor. However, several state agencies, including the Supreme Court, had previously moved to San Francisco, which put Sacramento at risk of losing the status as the state capital. 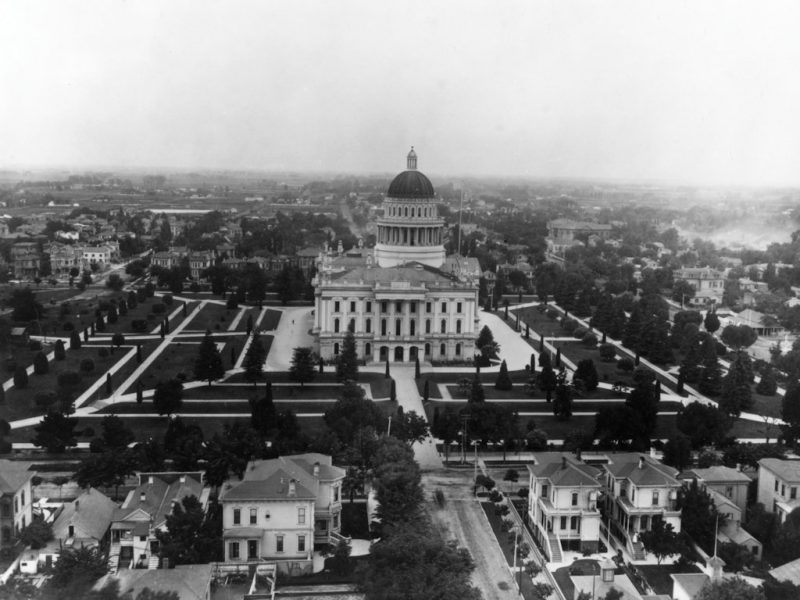 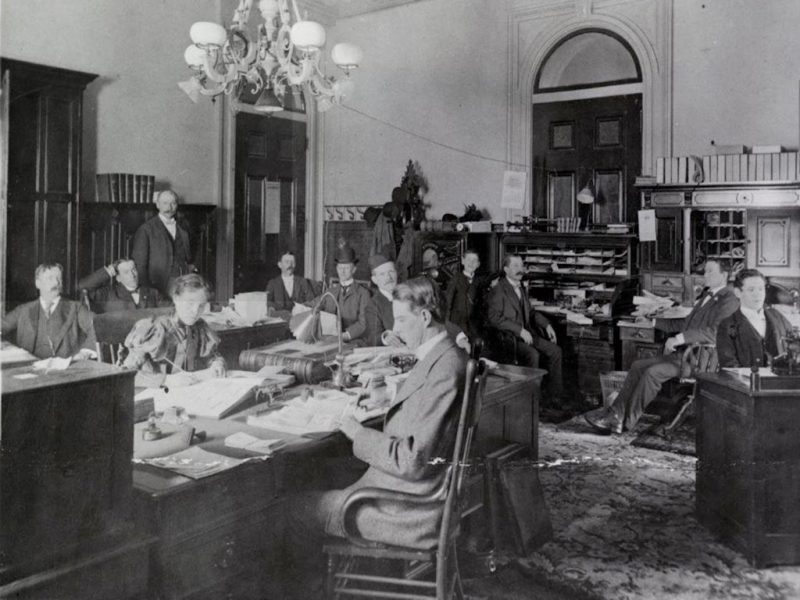 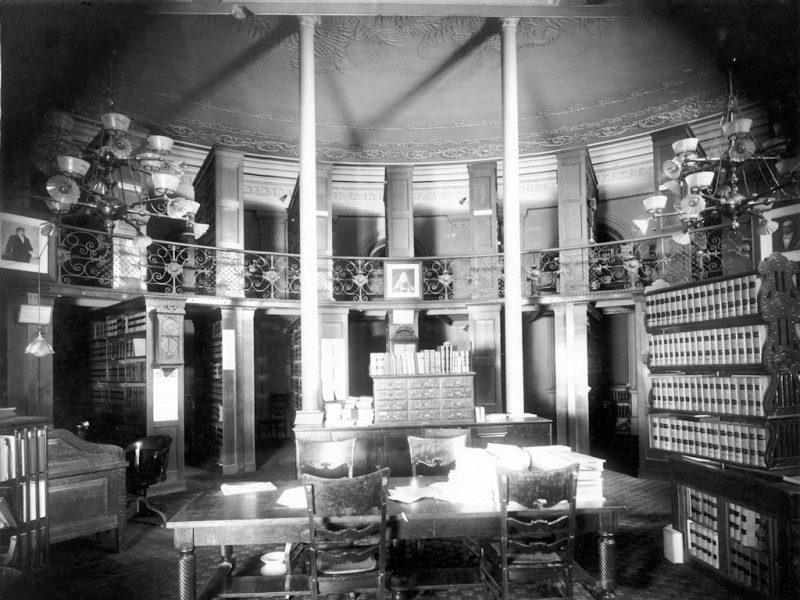 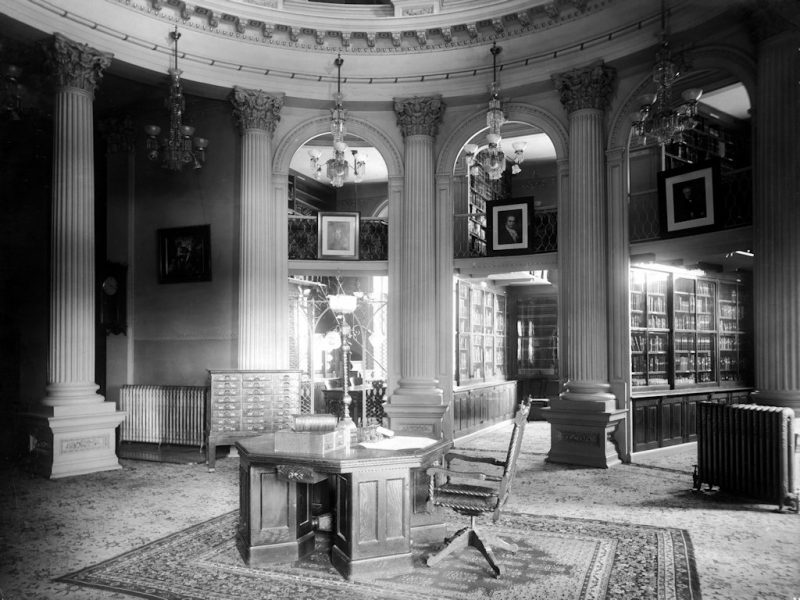 To remain the capital city, the City of Sacramento purchased real estate and state bonds, which financed the design and construction of two new buildings in order to expand office space. The city approved a $700,000 spending budget for the purchase of two square blocks between 9th and 10th and L and M Streets. This was the initial stage of what eventually became the Capitol Extension Group, an additional two buildings that serve the Capitol. Specifically, the acquired area became the construction site for a new state library and a new state office building. A year later, another $300,000 served as the funding for the construction of the buildings. However, World War I delayed the groundbreaking until March 1922. 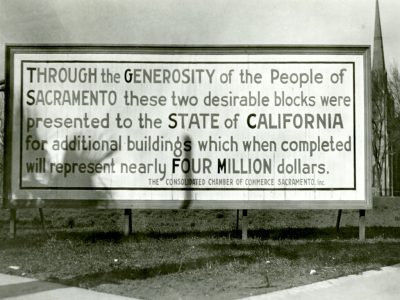 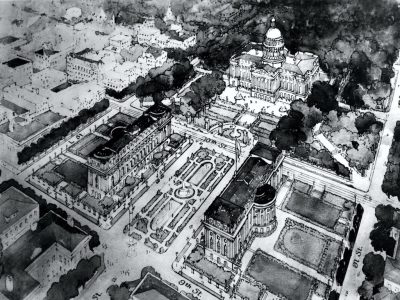 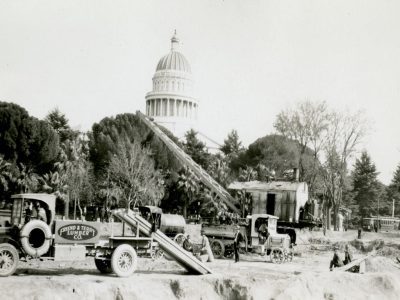 Located across the street from the west entrance of the State Capitol Building, the Stanley Mosk Library and Courts Building and the [Office Building No. 1] Jesse Marvin Unruh Building create a beautiful foreground for the State Capitol Building and act as a striking architectural transition between it and the modern structures lining Capitol Mall. Together, they form what is known as the Capitol Extension Group. In 1984, both buildings were placed on the National Register of Historic Places.

By the early 1900s, the California State Library, located in the Capitol Building since 1869, and other state departments were in critical need of space. Moreover, several state agencies including the Supreme Court had moved to San Francisco. To keep the capitol in Sacramento, the City of Sacramento purchased the real estate and State bonds financed the design and construction. A celebratory parade was held with bands and school children carrying flags in 1917. Because of World War I, groundbreaking was delayed until March 1922. The State Library completed its move into the new facility in 1928. The Library shares space with the Third District Court of Appeal. The Unruh Building houses several State departments.

The Capitol Extension Buildings are an adaption of Classical Greek architectural style, popular during the 1920s. Both were designed by the prestigious San Francisco firm of Weeks and Day. The exteriors of the two buildings are mirror images of each other. Designed to be seen on all four sides, the facades of the buildings are a combination of Sierra white granite quarried and installed by the McGilvary-Raymond Granite Company of Madera County and “granitex” terra cotta manufactured and installed by Gladding, McBean of Lincoln, California. Twelve different kinds of marble were used in the interiors of the office buildings and there are excellent terrazzo and mosaic floors throughout along with beautiful white marble stairways. 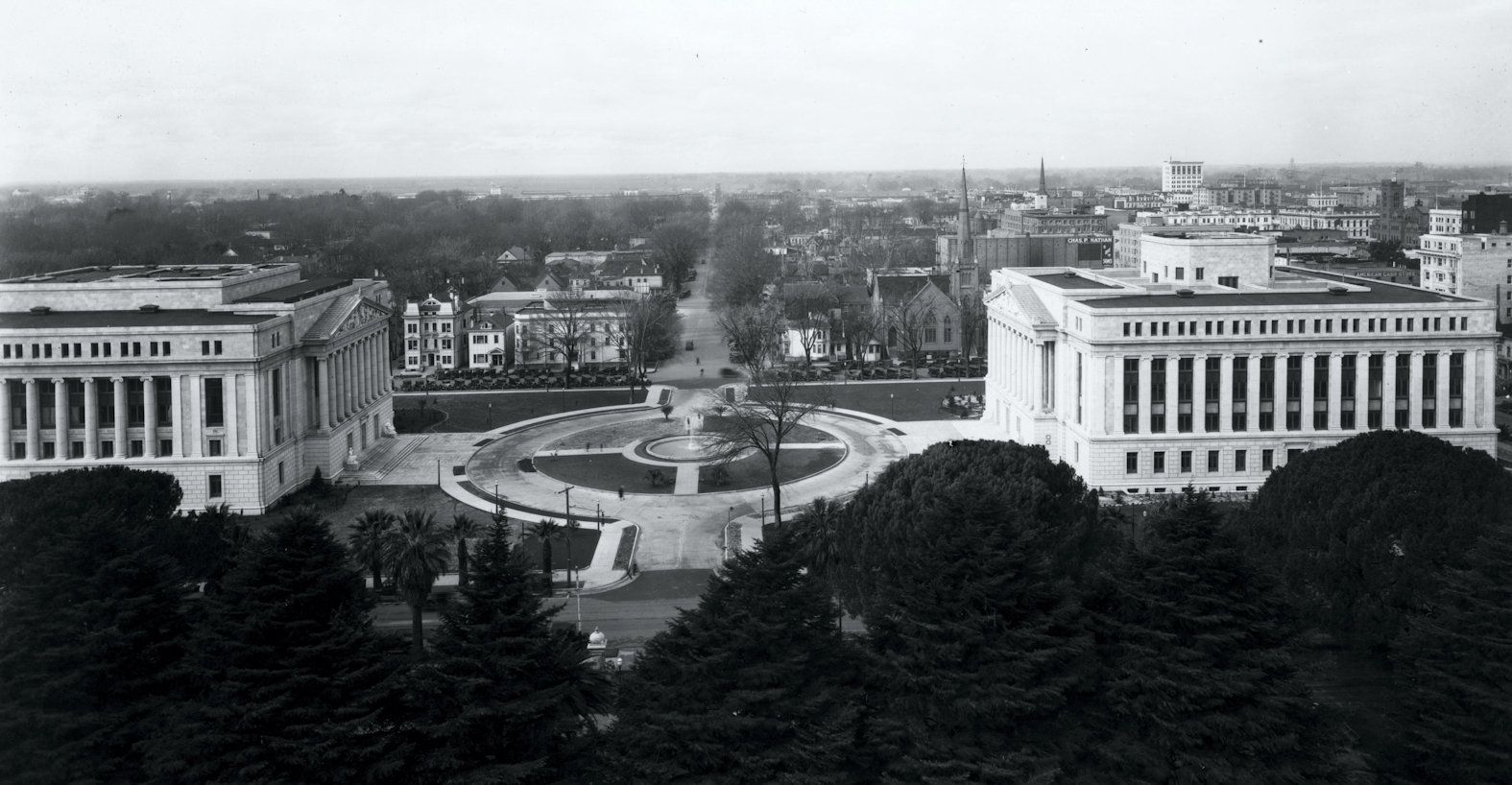 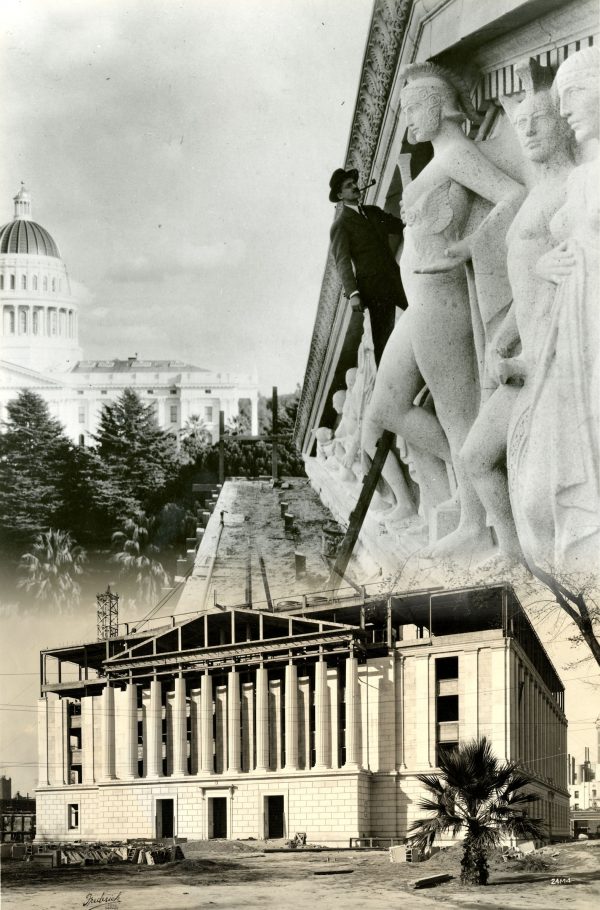 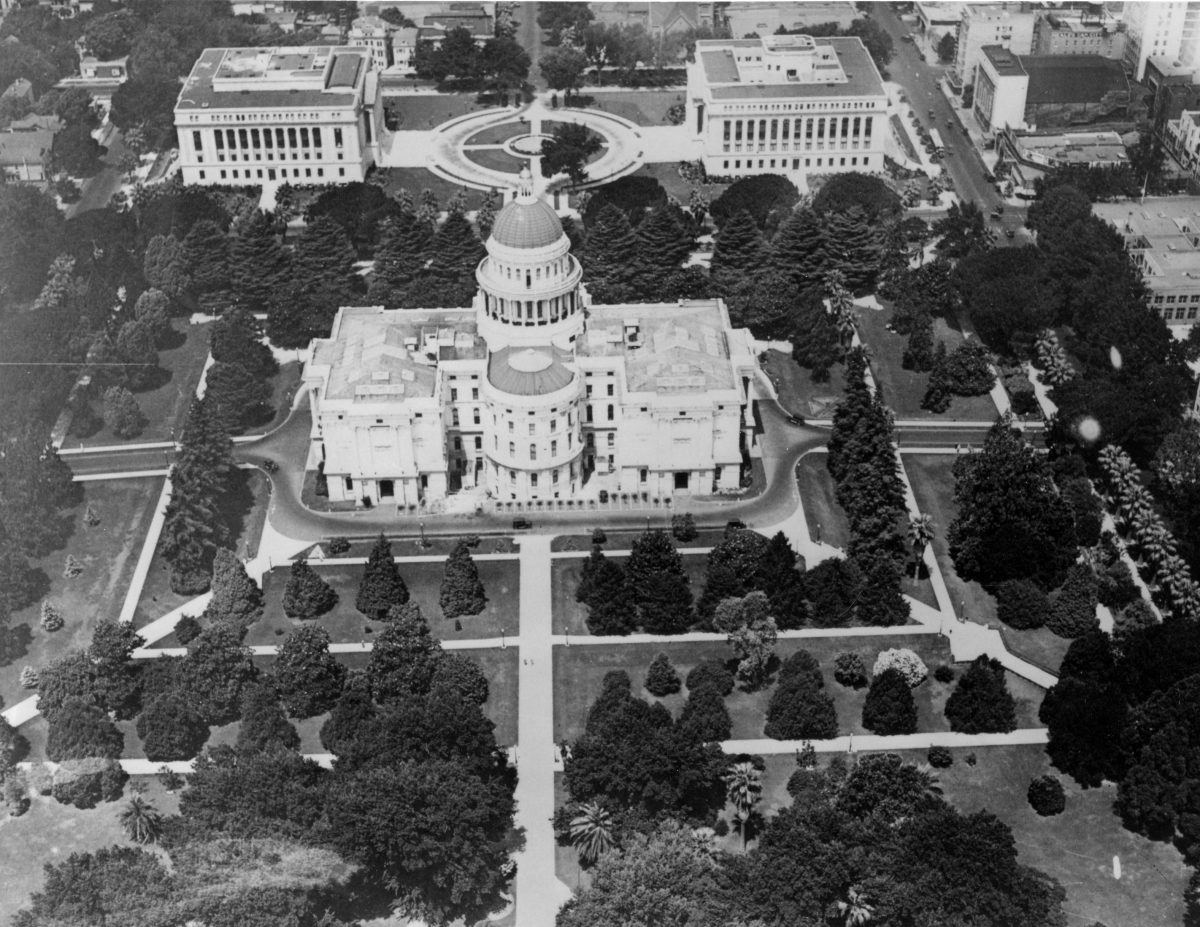 California’s population exploded again during World War II, and the Capitol again had to accommodate this growth. The aging seventy-year old building had no more room to add any additional office space, so state officers proposed an addition to the original Capitol building.

In 1944, state officials released plans for an “East Annex” to help accommodate government growth. Because the new expansion directly attached to the original Capitol, the prominent apse on the eastside had to be demolished.

Construction began in 1949 and was completed in 1951. The new wing, designed in a “modified classic style,” complimented the architecture of the original Capitol. For the past 60 years, the six-story, 250,000 square foot East Annex has provided needed space for the Governor, other executive officers, and the Legislature. 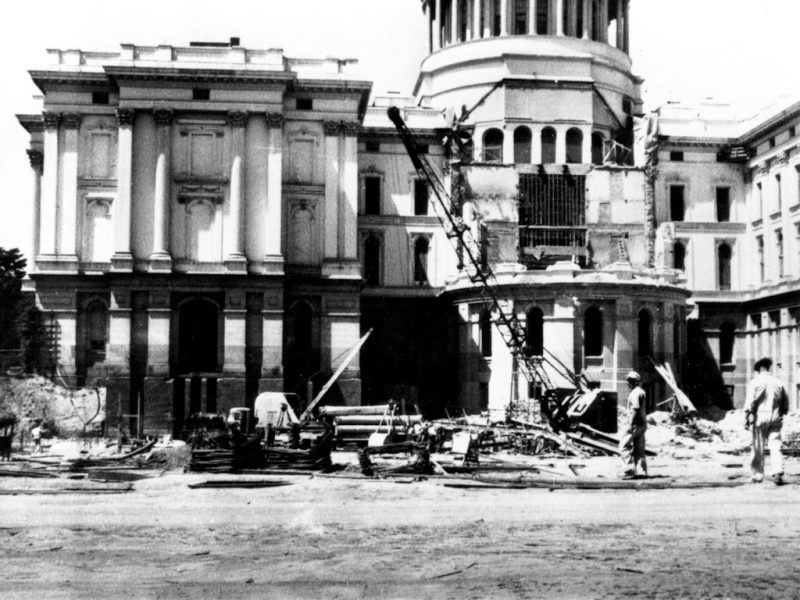 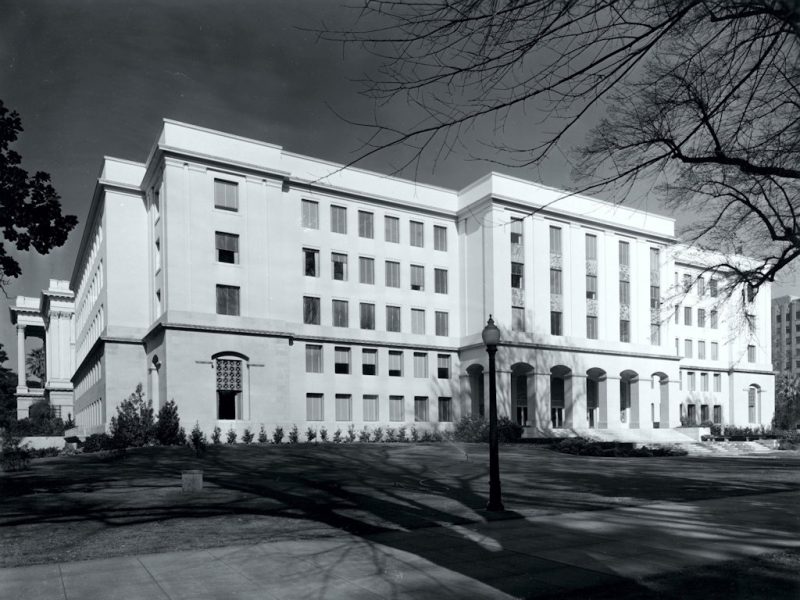 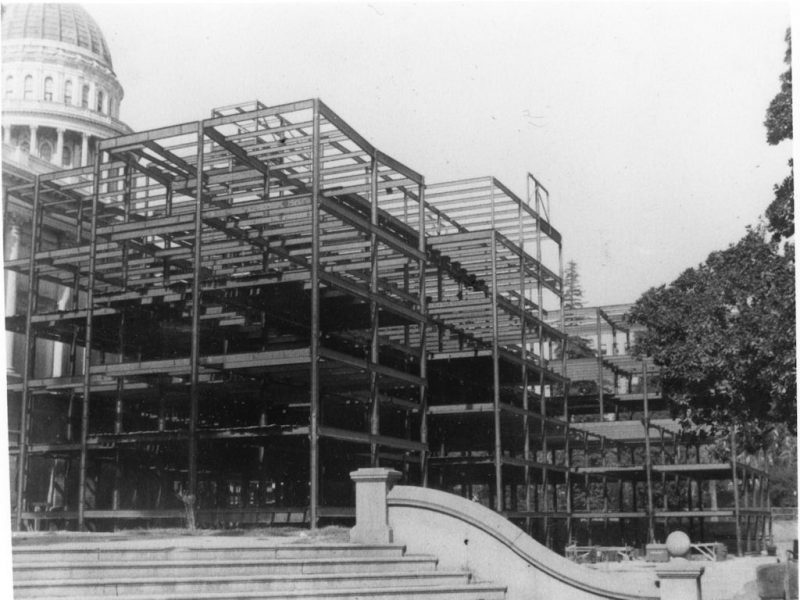 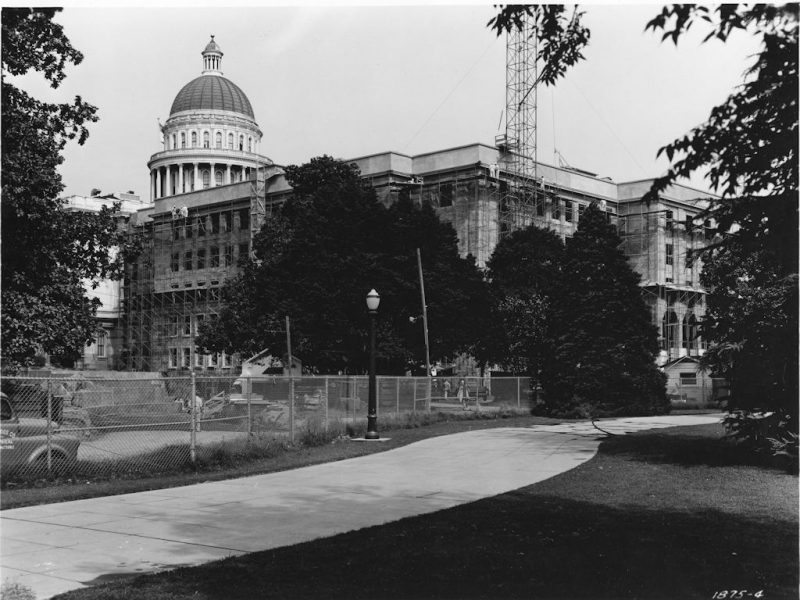