This exhibit was open from Spring 2009 through Spring 2010 to commemorate the placement of the statue of Unitarian Minister Thomas Starr King on the second floor landing of the historic Capitol building.

Thomas Starr King was described as “a tower of strength to the cause of his country” by the California Legislature in 1927. The statue, currently located in Capitol Park, symbolizes California’s debt to King and reflects his importance in California History.

The exhibit exposed the public to King’s legacy as a tireless advocate for Union loyalty during the Civil War, his support for an early form of the Red Cross, and his efforts as promoter of California’s natural beauty. 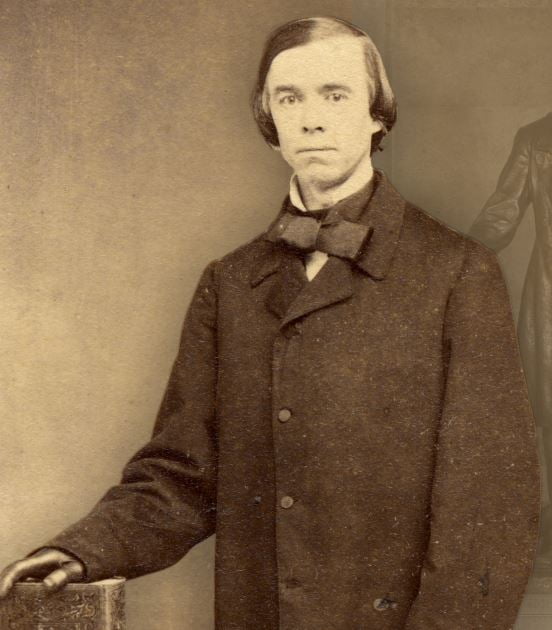 “We are not to live outside the world, but in it, feeling its passions, working in its interests, striving to do our duty in its trials.”

This is a photograph of the frail, five-foot tall Unitarian minister from Boston who, in 1927, California recognized as one of its two most illustrious historical figures. At the dawn of the Civil War, Thomas Starr King spoke out on behalf of the Union, African Americans, the Sanitary Commission, the magnificent California landscape, and the Unitarian church.

At the time of his death, The San Francisco Bulletin described him as one of California’s “noblest orators” and the country’s “ablest defenders,” primarily because of the rousing, patriotic speeches he delivered. Californians admired their young preacher, but the intense traveling and speaking took a toll on his health. At the age of 39, after only four short years in California, he contracted diphtheria and died of pneumonia a few days later. 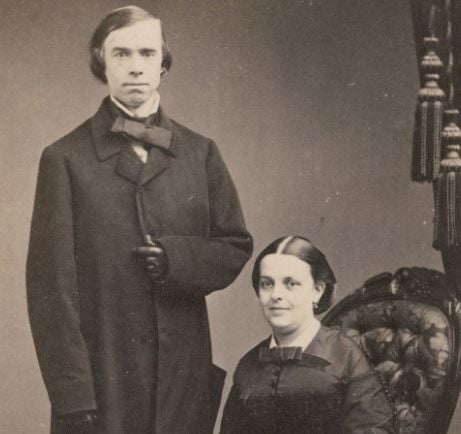 Born in New York in 1824, Thomas Starr King inherited his humor and “preacher abilities” from his father, Universalist minister Thomas Farrington King, and his intelligence and character from his mother, Susan Starr. Starr King’s father died when he was 15 years old, leaving him the sole supporter of his mother and five siblings, and dashing his dreams of attending Harvard University.

The ambitious boy educated himself by reading borrowed books, attending lectures, and listening to the best preachers of the day. Boston’s Hollis Street Unitarian Church hired King in 1848 where he remained for 11 years. As King lectured throughout the East, his reputation spread across the nation, and when the San Francisco Unitarian Church invited him to be their pastor, King accepted. In 1860, Thomas Starr King, his wife Julia, and their young daughter traded Boston society for the untamed world of California. 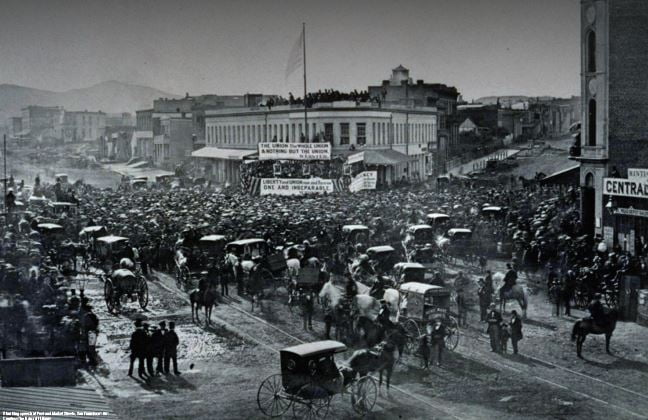 “We say it is cheaper to fight for the Constitution, and the flag, and the nation’s unity than to make terms with abominable treason.”

Prior to the Civil War, Californians had to choose whether to support the Union or the Confederacy. Some even wanted to declare California an independent republic. This photograph shows the crowd that gathered to hear Starr King speak in San Francisco in 1862. From his flag-draped podium, Thomas Starr King implored Californians to remain loyal to the Union. Before the invention of microphones, the frail man with a mighty voice delivered patriotic speeches in which he called for a “restored, peaceful, majestic, irresistible America.”

He actively supported Abraham Lincoln for president, and campaigned tirelessly for California’s first Republican Governor, Leland Stanford. While it is true that no one person could “save California for the Union,” King’s influence on Californians’ votes and pocketbooks was undoubtedly profound. 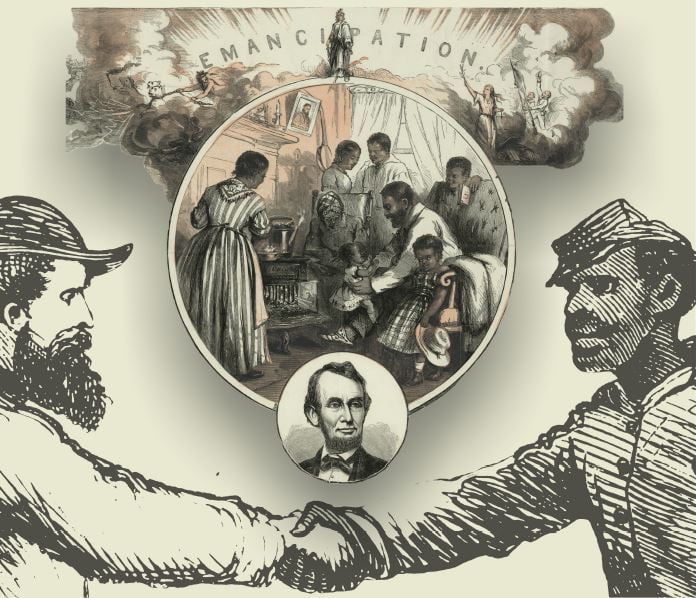 “Wherever we find many races brought together, there God had his greatest work to do. The Almighty has a great mission for this nation. Here the Church is to proclaim the equality of the races.”

Thomas Starr King advocated for Black liberation a decade before his arrival in California, and he continued to do so until his death. African Americans encountered serious legal, political, and social inequities in the “free” state of California during the 1860s. King supported equal education rights and appeared with African American leaders in fundraising ceremonies. He preached against slavery, and after Abraham Lincoln signed the Emancipation Proclamation in 1863, King again took an unpopular stand by favoring the enlistment of Black troops in the Union Army.

The African American community mourned King’s death in 1864 and drafted a resolution that stated: “We deplore the loss of a true philanthropist and public benefactor, an unflinching friend of equal rights. One who was ever ready to dedicate his time…to every enterprise that sought the improvement of his fellow-men, without regard to creed or color.” 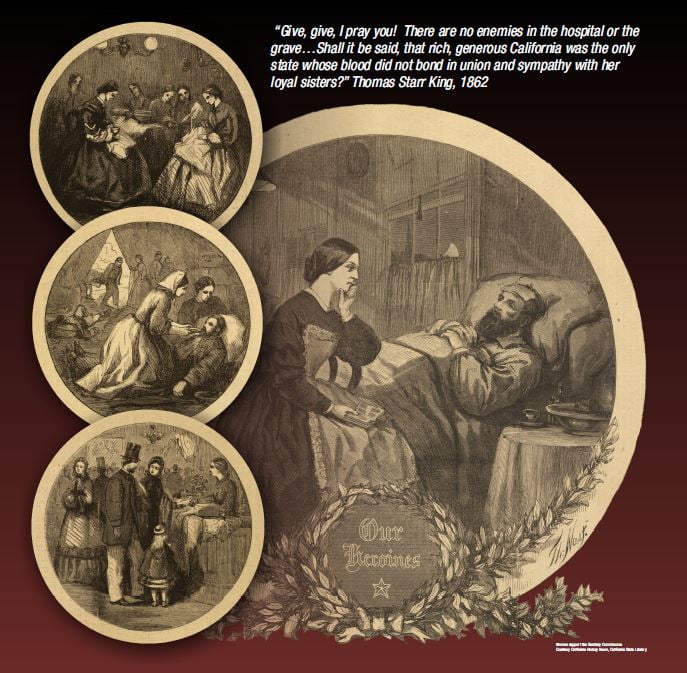 “Give, give, I pray you! There are no enemies in the hospital or the grave…Shall it be said, that rich, generous California was the only state whose blood did not bond in union and sympathy with her loyal sisters?”

Thanks in large part to the tireless efforts of Thomas Starr King, California contributed more money to Union war relief than any other state in the Union. The majority of those funds supported the United States Sanitary Commission. The Sanitary Commission, a forerunner to the Red Cross, depended on contributions from the public to provide sick and wounded soldiers with food, clothing, and medicine. New York Unitarian minister, and King’s personal friend, Henry W. Bellows, organized the Sanitary Commission in 1861.

King traveled extensively throughout Northern California preaching about the hardships that the soldiers were confronting. Californians heartily responded to his impassioned pleas by giving over $1.2 million to the United States Sanitary Commission. This represented nearly 25% of the total $4.9 million collected nationwide. 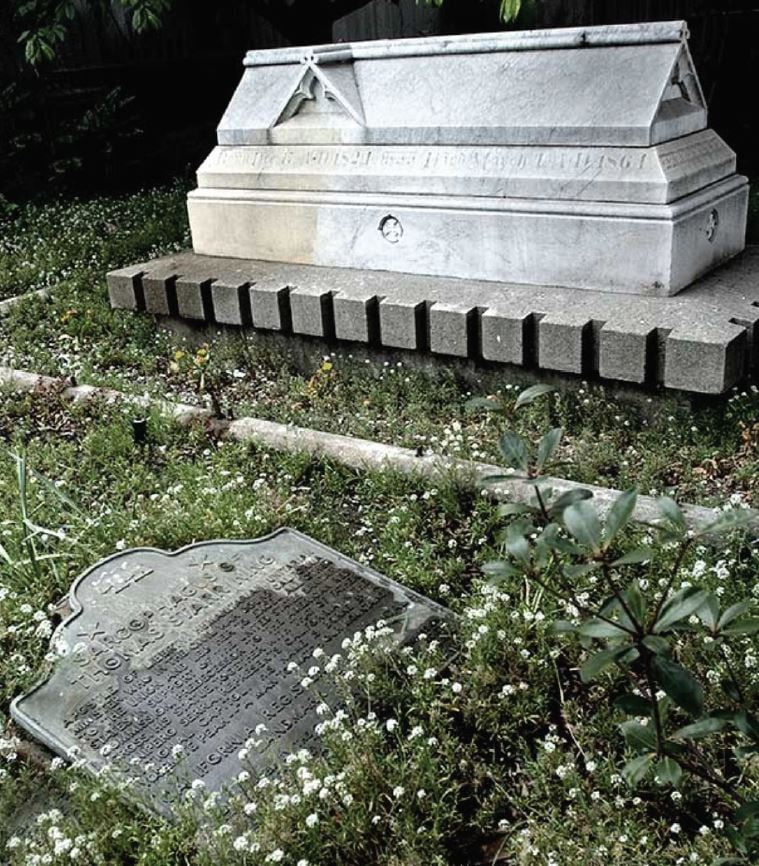 “The mountains he loved and praised are henceforth his monument and his mourners. The White Hills and the Sierra Nevada are today wrapped in his shroud.”

The traveling, lecturing, and fundraising throughout California took their ultimate toll on King’s frail physique. Thomas Starr King died on March 4, 1864 of pneumonia. When the public learned of Starr King’s death, the San Francisco newspaper Alta California wrote that “each heart stood still for a moment, crushed with the tidings.” The California State Legislature adjourned for three days so its members could travel to San Francisco for the funeral, state and municipal courts closed, and flags flew at half mast. The news hit the African American community especially hard, and a Black newspaper, the Pacific Appeal, wrote: “The colored* people of this city have lost a true friend.” Newspapers printed tributes, reflecting King’s national appeal. Thomas Starr King was, as the Alta California stated, a “true apostle of humanity.”

* In the mid-19th century, “colored” was an acceptable term referring to Black people. Through the decades, this became a derogatory term. Today it is considered offensive. 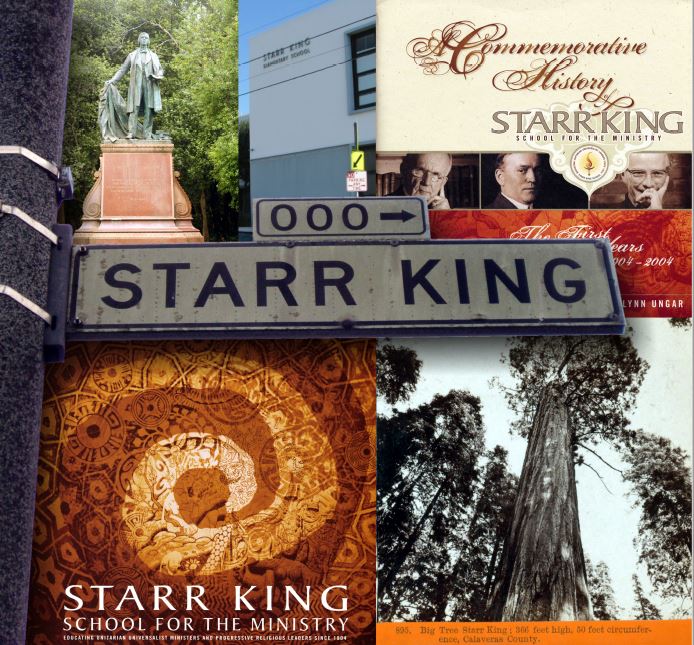 Thomas Starr King’s legacy lives on in the sites and organizations named in his honor, including two mountain peaks, a giant sequoia tree, six schools, two churches, two streets, a park, a building, and three statues/monuments.

Thomas Starr King’s passion for religion, education, and nature manifest themselves every day in these and other institutions devoted to his memory.