The Dust Bowl, California, and the Politics of Hard Times

In the 1930s, a series of severe dust storms swept across the mid-west states of Oklahoma, Arkansas, Kansas, and Texas. The storms, years of drought, and the Great Depression devastated the lives of residents living in those Dust Bowl states. Three hundred thousand of the stricken people packed up their belongings and drove to California. “The Dust Bowl, California, and the Politics of Hard Times” was exhibited at The California State Capitol Museum on June 17, 2013, until May 15, 2014.

This exhibit examined the cultural, social, and political impact the Dust Bowl migrants had on California. The photographs of Dorothea Lange, songs and lyrics of Woody Guthrie, and storytelling genius of John Steinbeck bring the era and people to life with their dramatic and poignant styles. Two California governors and their administrations grappled with the influx of the hundreds of thousands who flooded the state throughout the 1930s. The great Dust Bowl migration transformed and reshaped California for years to come. 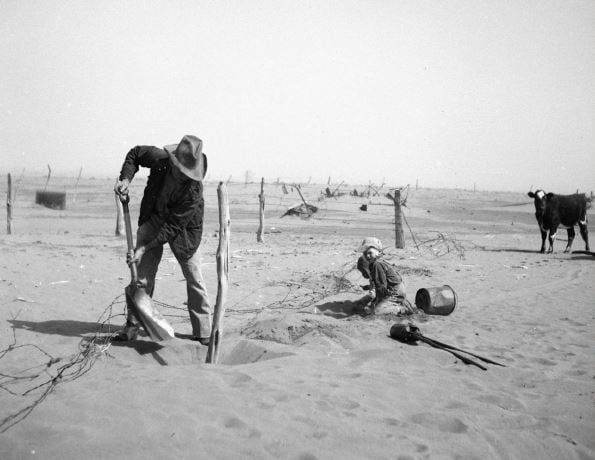 The Dust Bowl was the greatest man-made ecological disaster in American history. At the outbreak of WWI, the government encouraged farmers to grow wheat.  Land was cheap and farmers plowed millions of acres of virgin land. They removed the native grasses that held the soil in place. Then, the rains stopped. Crops withered and died.

Winds carried the top soil away, resulting in huge dust storms. The pervasive dust choked the life out of livestock and humans alike. Newspapers called the area a “Dust Bowl.”

Driven by the depression, drought, and the Dust Bowl, thousands upon thousands left their homes in Oklahoma, Texas, Arkansas, and Missouri. Over 300,000 of them came to California. They looked to California as a land of promise. Not since the Gold Rush had so many people traveled in such large numbers to the state. The Dust Bowl migrants came to California to stay, and they changed the culture and politics of the state forever. 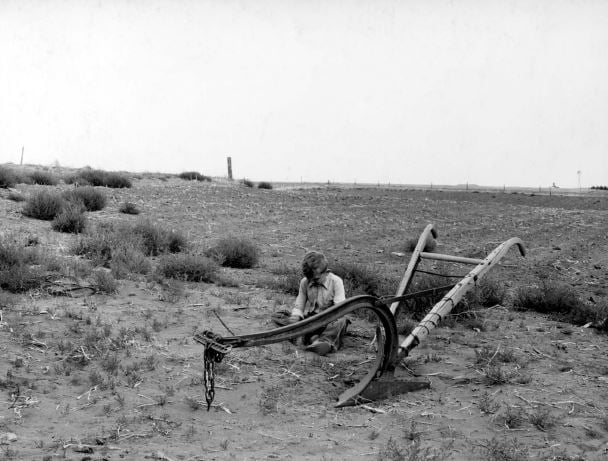 Even though the Great Depression hit California hard in the early 1930s, agriculture was one of the areas that expanded in the state. Growers in the San Joaquin Valley quadrupled their acreage in the mid-1930s. With that, the demand for workers rose. So did wages. California cotton growers paid nearly 50% more for picking cotton than farms in the southern plains.

Unemployment relief was also higher in California. An eligible family of four could receive $40 per month. This was double the amount of relief paid in the southern plains states.

Relatives living in California encouraged family members back home to move to California. They had moved to the state in the 1920s and were doing well. Word of their success spread and set the migration in motion. California’s climate, relief, and chances for work attracted the Dust Bowl migrants. Their vast numbers overwhelmed the state economically, politically, and culturally. 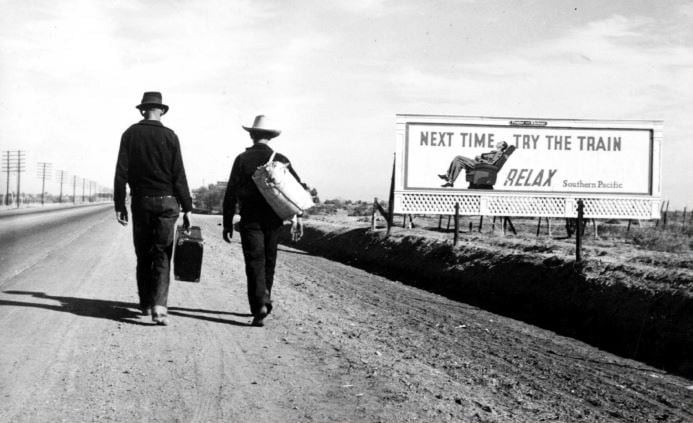 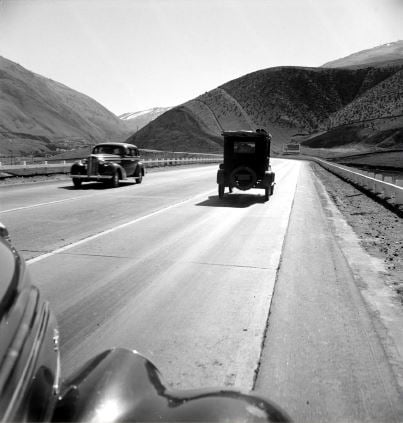 Life in the City

The city of Los Angeles managed the Great Depression years better than most. It had a diverse economy based on several industries: film, tourism, oil, agriculture, manufacturing, and trade. Migrants with skills fared best. Job prospects were good for people with aircraft and auto assembly experience. The Boulder Dam construction project also offered many blue-collar jobs. It was harder for migrants without skills. They depended on personal connections from family members to help them out. 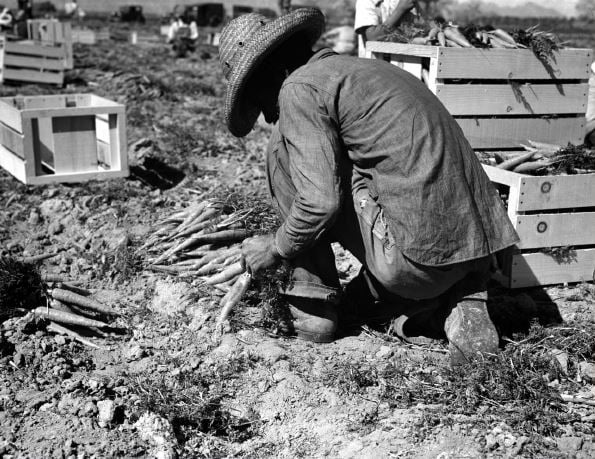 Life in the Valley

Agriculture was an important industry in California in the 1930s. More than half of the country’s oranges, grapes, walnuts, carrots, and lettuce came from the fields of California’s fertile valleys. Large, commercial farms dominated California’s agricultural landscape. These farms specialized in one or two crops. They depended on a labor force that appeared at harvest time and disappeared after the crops were picked.

Mexican farm workers met the needs of this demanding way of life. They worked for the harvest season, went home to Mexico during the winter months, and returned again in the spring to work. The hard times of the depression upset this system. New immigration laws forcibly deported thousands of Mexican workers. Their absence created a need for farm workers. This attracted the Dust Bowl migrants to settle in California’s farm valleys. In a short amount of time, however, there were too many workers and not enough jobs. 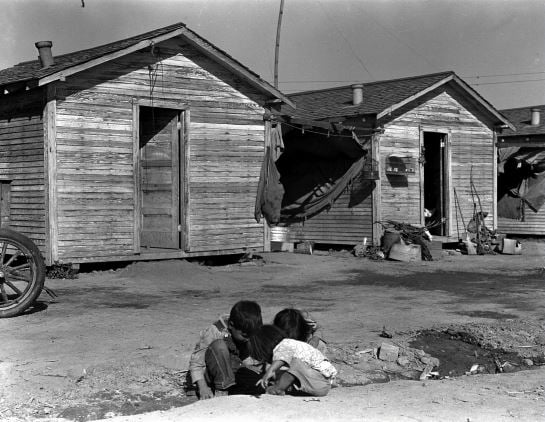 Life for the Migrant

Dust Bowl migrants had little food, shelter, or comfort. Some growers allowed workers to stay rent-free in labor camps. Others provided cabins or one-room shacks. Still others offered only a patch of muddy ground to place a tent. The majority of the newcomers found shelter where they could. Hundreds lived along irrigation ditches or in empty fields near the large ranches.

Sanitation was poor. In rainy periods, outhouses flooded. This contaminated the drinking water. The years 1936 and 1937 represented the peak migration years. With more people living in desperate conditions, disease spread. Typhoid, smallpox, tuberculosis, malaria, and pneumonia were widespread. Residents died from health problems, starvation, and disease. In 1937, the Farm Security Administration (FSA) built 10 federal camps that provided decent housing in migratory labor camps, but they did not meet the overwhelming need for migrant housing. 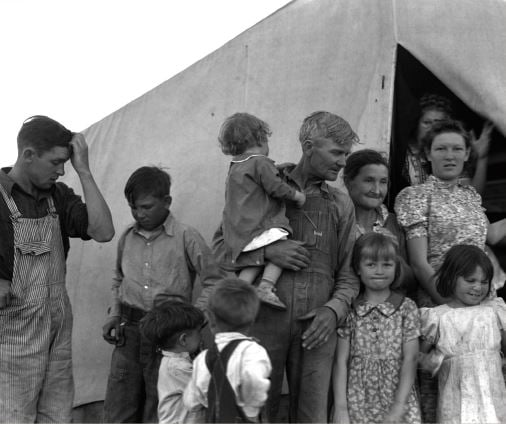 The first year in California was an unsettled time for migrants. Families moved from place to place in search of work. Children as young as 7 or 8 commonly worked in the fields. The 98 cents they earned for a day of picking cotton helped their families survive.

Once settled, migrant children attended school. Some labor camps had their own elementary schools. Most did not. Migrant children attended school with native California residents. Barefoot and dressed in rags, they stood out. The native children teased the migrants for their strange accents and poor clothes. Instead of “migrant,” their California classmates called them “maggie,” or “maggot.” Migrant children learned to be ashamed of how they dressed, talked, and what they ate. Teachers attacked the children’s accents, vocabulary, religion, and grammar. Schools even taught them to bring sandwiches for lunch instead of biscuits and beans.

“No one likes me, I’m an Okie.” “We ain’t people. We are sharecroppers.”
Comments from children living in federal camps, c.1938 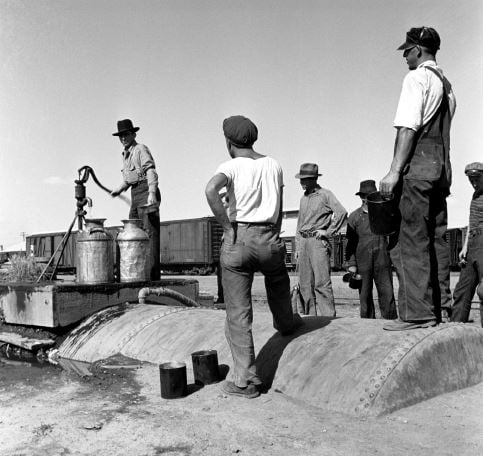 More people migrated to California in the 1930s than any other state in the country. By 1938, the population in most valley towns increased by 50%. The constant arrival of poor migrants overwhelmed schools and services in the small farm towns located throughout the valley. Throughout the valley, these newcomers competed with residents for jobs. They worked for less money and crossed picket lines. Kern County suffered the worst. Its population increased by 64%, or 52,000 new residents over the decade. Police, medical, housing, and welfare services were stretched to the limit. Townspeople labeled Dust Bowl migrants as “Okies,” no matter where they were from. To them, Okies were ignorant, uneducated, dishonest, and strange. Some wanted to help the Okies by providing food and clothing. Others wanted them to leave California and go back home. Both sides agreed that the newcomers were not prepared for life in California. 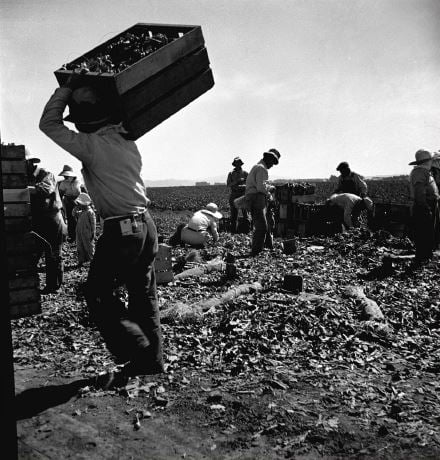 Migrant Farm Labor and the Unions

The small towns up and down the farming valleys were not the only ones who struggled with the influx of Dust Bowl Migrants. The Okies also disrupted the lives of Mexican and Filipino farm workers.

Mexican and Filipino workers dominated the harvest labor force for 2 decades. They handled cotton, fruit, sugar beets, and vegetables with great skill for low pay. In the early 1930s, these workers organized and formed unions. Their unions called for labor strikes throughout California. One of the largest was the 1933 cotton strike. More than 18,000 cotton workers stopped working and demanded better wages.

The Okies did not join unions. They crossed picket lines and worked for less money. They took jobs from Mexican and Filipino workers. Before the Depression, 20% of migrant workers were white. By 1936, the number had increased to 85%. The Okies had a double impact on California agriculture in the 1930s. They brought national attention to California’s migrant farm system. They also held back efforts to unionize Mexican farm workers. 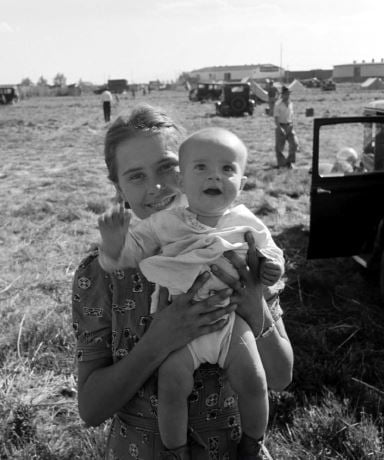 The arrival of the Dust Bowl migrants forced California to examine its attitude toward farm work, laborers, and newcomers to the state. The Okies changed the composition of California farm labor. They displaced the Mexican workers who had dominated the work force for nearly two decades. They lowered the standard of living for farm workers, and delayed their unionization efforts. The works of John Steinbeck, Dorothea Lange, and Woody Guthrie created an image of the migrant that could not be ignored. They exposed an agricultural system that had gone unnoticed for years. As the nation moved toward war in the 1940s, the public outcry caused by the Grapes of Wrath, Lange’s photographs, and Guthrie’s Dust Bowl ballads dwindled. The Okies found jobs in the defense industry, and assimilated into society throughout the war decade. Adverse conditions still persist for farm workers. Efforts at relief have never equaled the efforts of the New Deal. 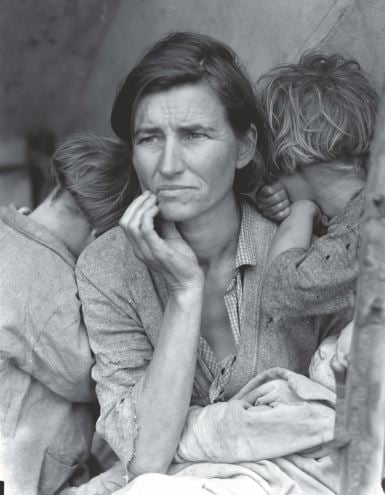 “I wish she hadn’t taken my picture. I can’t get a penny out of it. [Lange] didn’t ask my name. She said she wouldn’t sell the
pictures.” Florence Owens Thompson, c. 1970s

This single photograph is the classic icon for the Great Depression. At the time the photo was taken, the 32-year-old woman was a widow with 7children. She remained nameless for 40 years. In the 1970s, Florence Owens Thompson wrote to a local newspaper and identified herself as the Migrant Mother.

Florence first came to California in the1920s with her husband, Cleo Owens. Cleo died of tuberculosis in 1931. In 1936 Florence, her children, and her new companion, Joe, drove to Nipomo to pick peas. Disappointment greeted them. There was no work and the car had broken down. Joe walked to town to fix the car’s radiator. Florence remained in the camp. That was when Dorothea Lange drove up and took her famous photographs. In 1983, Florence had a stroke. One of her sons appealed to a local newspaper for help with medical expenses. More than $35,000 poured in from all over the country. Florence Thompson died at 80 years of age. Her gravestone reads: “Migrant Mother—A Legend of the Strength of American Motherhood.” 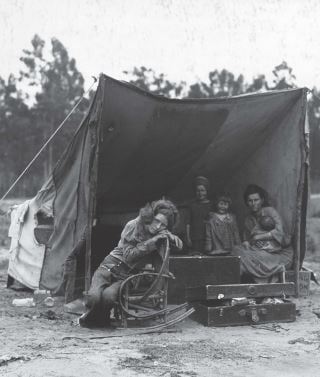 Dorothea Lange and the Migrant Mother

“I was following instinct, not reason; I drove into that wet and soggy camp and parked my car like a homing pigeon. I saw and
approached the hungry and desperate mother, as if drawn like a magnet.” Dorothea Lange, 1960

The photograph known as “Migrant Mother” is one of a series of 6 photographs that Dorothea Lange took in 1936 in Nipomo, California. Lange was driving home after a month on the road. She noticed a sign for a pea pickers’ camp, but drove on. Twenty miles later, she turned around and went back. Lange drove into the camp. She immediately spotted the woman and her 4 children sitting in a lean-to. “I do not remember how I explained my presence or my camera to her,” Lange later explained. “I made five exposures working closer and closer from the same direction.” The sixth and final shot became the famous “Migrant Mother” photograph. Dorothea Lange did not make any money from the photograph because she worked for the federal government. She did profit from the attention it received, which gave a big boost to Lange’s career. 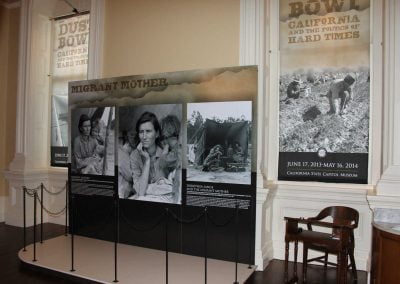 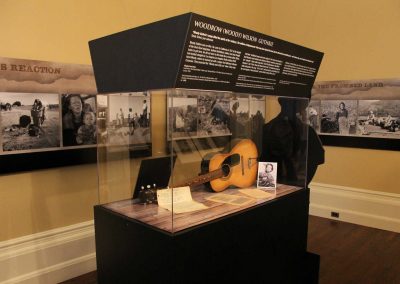 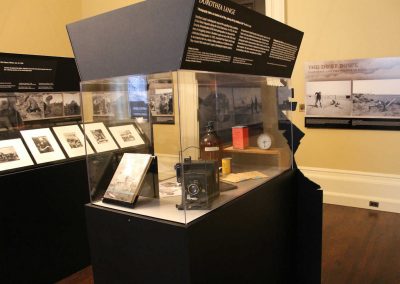 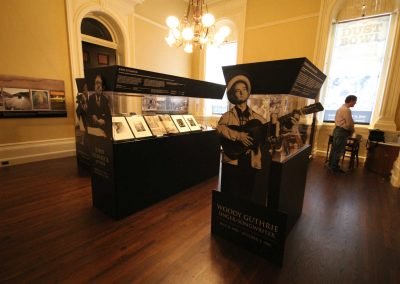 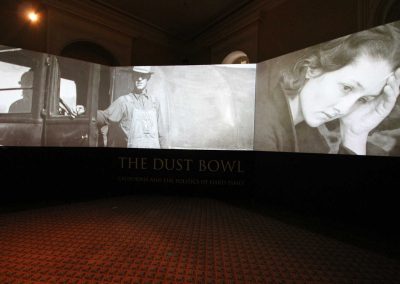 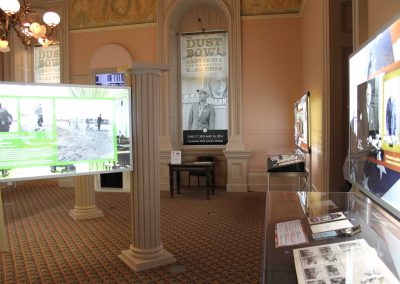 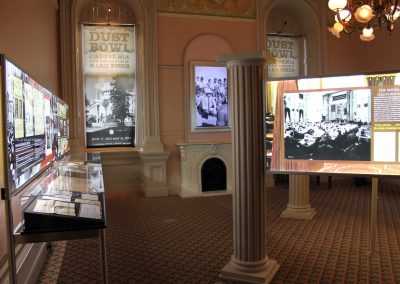 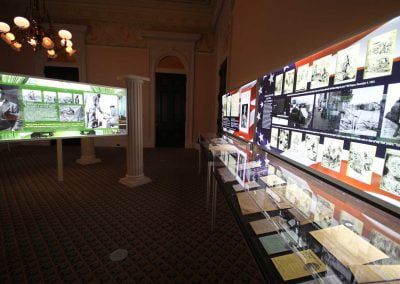 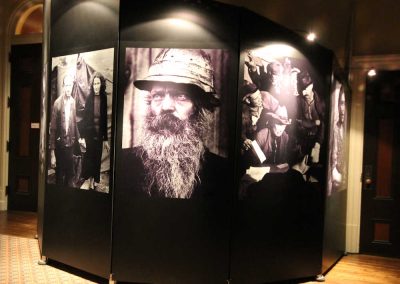