The color red dominates the Chamber, a tradition borrowed from England’s House of Lords.

This room is available as part of the Second Floor virtual tour.

SENATORIS EST CIVITATIS LIBERTATEM TUERI
It is the duty of a Senator to guard the liberty of the Commonwealth.

This motto identifies the goal of the California State Senate and the rights of the people, and conveys the significance of the legislative process: laws made in our Legislature can have an effect on the liberty guaranteed to all Californians.

Public awareness, access, and participation in the legislative process are critical when considering laws affecting the people of California. There are many ways for Californians to influence their Legislature and the laws that shape their lives. You can view Senate proceedings via cable television stations across California. Better yet, the public can experience the proceedings in person from the balcony gallery, which overlooks the Senate Chamber floor. The gallery is an architectural feature that symbolically reflects the democratic process. It enables the public to observe their elected officials in action.

While the Senate and Assembly share many traditions, they also have some important differences. The Senate is made up of only 40 Senators, each representing approximately 987,500 people. In contrast, the Assembly has twice as many members for a total of 80. The number of Senators and Assembly Members has remained constant since 1862 despite leaps in the state’s population since that time. Once elected, a Senator, like an Assembly Member, can serve no more than twelve years total in the Legislature. Unlike in the Assembly where the electronic voting system is used, in the Senate a roll-call vote is taken by the traditional voice vote – each Senator calling out “Aye” (for yes) or “No.”

Visitors to the Senate Chamber will immediately notice, in contrast to the Assembly, the voting method, size of chamber, and general atmosphere. The color red dominates the Chamber, a tradition borrowed from England’s House of Lords. 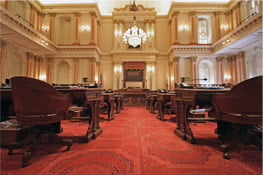 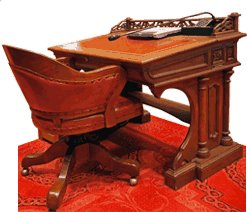 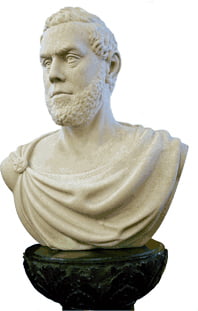