The office of the President pro Tempore is decorated in the rich red shades that dominate the Senate Chamber and contains several Renaissance Revival antiques once used by previous state leaders.

The President pro Tempore is the central figure in the policy-making and politics of the State Senate, elected by a vote of all the Senators as the leader of the Upper House. They are responsible for its administration, policy agenda, and its relationships with the Assembly and the Executive Branch.

The President pro Tempore chairs the Senate Rules Committee, working with the four other committee members to confirm certain appointments made by the Governor. The committee is also responsible for assigning senators to various committees and appointing committee chairpersons. It then refers legislation to the standing or temporary committees for hearings. Senators are elected to serve on the Rules Committee by a vote of the full Senate membership. 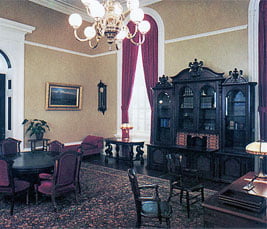