The color green dominates the chamber, a design element borrowed from the British Parliament’s House of Commons.

This room is available as part of the Second Floor virtual tour.

LEGISLATORUM EST JUSTAS LEGES CONDERE
It is the duty of legislators to make just laws.

This guiding motto, displayed above the podium of the Assembly Chamber, reminds Assembly Members of their responsibility. It is a responsibility that has grown over the years. In 1849, the first Legislature passed 146 laws and 19 resolutions. Today’s Legislature will propose, analyze, and debate over 6,000 bills in a single, two-year session.

Assembly Members are elected to two-year terms and can serve a maximum of 12 years in the Legislature. There are a total of 80 Assembly Members. At the beginning of each two-year session, the first order of business is to elect their officers, including the Speaker of the Assembly. The Speaker’s responsibilities as leader of the Assembly include appointing committee members and chairpersons, and assigning bills to committees.

Other officers elected at the beginning of each term are the Chief Clerk, Chief Sergeant at Arms, and the Chaplain.

Much of the legislative work is accomplished in committee hearings. Here, legislators analyze, consult, debate, and hear testimony from both private and public interests on every bill. If a bill successfully passes through the committee hearing process, it is forwarded to an Assembly floor session for further discussion and debate.

Since 1935, each member’s desk is equipped for pushbutton voting. As members cast their votes, a green light (‘yes’ vote) or red light (‘no’ vote) appears next to each name on electronic panels located at the front of the chamber. This is unlike the Senate, where a voice roll-call vote is taken.

The public is invited to witness the Assembly’s proceedings from a balcony gallery overlooking the chamber floor. This architectural feature reflects and reinforces the concepts of an open democratic system by providing access to all citizens, who are invited to observe their elected officials in action. The color green dominates the chamber, a design element borrowed from the British Parliament’s House of Commons. 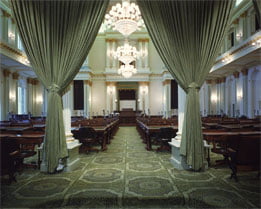 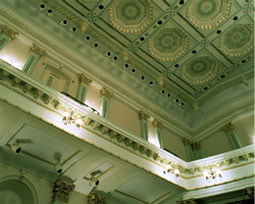 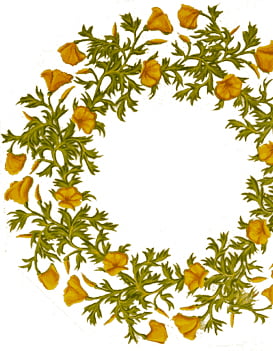