This room is one of two exhibit spaces located on the first floor of the Capitol. Part of the State Capitol Museum,
the Archives Exhibit Room is used for the display of rotating exhibits focused on topics related to California’s rich history and current events.

This room is available as a virtual tour on our website.

View Virtual Tour
The State Archives exhibit room provides a visual representation that the offices of the State Archives, now located one block south of the Capitol, were once housed in the Capitol. Unlike the other exhibit rooms that museum staff have furnished and staged to look exactly like historic offices, these rooms remain unfurnished. The architecture of the rooms, however, has been recreated in exacting detail.

Perhaps the most striking feature of the Archives exhibit room is the ceiling. Recreated from a pattern found on a small remnant of the original ceiling, today, the poppy design parget ceiling and decorative frieze have been returned to their former glory. Multicolored parget plasterwork was common in the construction of the Capitol, but was something of a lost art by the time of the 1970s restoration. Artists used pastry tubes and other tools to apply plaster directly onto the walls and ceiling, where it was sculpted into its final designs and painted. 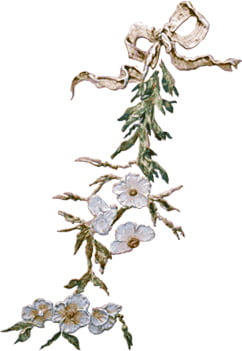 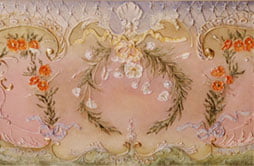