In 1862, quotas for men to fight in the Eastern United States were issued for each state. California did not have to meet the quota since it was required only to defend the West Coast. However, when the state of Massachusetts was not able to meet its required quota, California agreed to send its own troops to represent the state. One hundred brave California men volunteered to be soldiers for Massachusetts and went on to fight in over 20 battles during the Civil War. These courageous men became known as the “California Hundred” and carried a flag bearing symbols representing their home state.

A year earlier, in the late hours of Independence Day 1861, Major J. P. Gillis, a Confederate sympathizer, began waving a Confederate flag on the corner of 2nd and J Streets, in Sacramento. J.W. “Jack” Biderman witnessed the display and immediately wrestled the flag away from Mr. Gillis. Jack became somewhat of a local hero in Sacramento from the incident and would later be the first proprietor of the famous Silver Palace at the Central Pacific Rail Yard in West Sacramento.

The guidon flag proudly carried by the “California Hundred” and the “Biderman Flag,” the only known California Confederate flag in public trust, are now a cherished part of the Capitol Museum’s Historic Flag Collection. 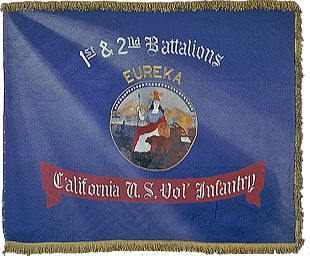 On May 1, 1897, Memorial Grove, a grove of tree saplings, was planted in Capitol Park to honor all Civil War soldiers who lost their lives. This living monument once included trees from the battlefields of Manassas, Harpers Ferry, Savannah, Five Forks, Yellow Tavern, Vicksburg and other Civil War-related sites. Many of them have been lost over the decades due to age, sickness, and drought. Visit the Capitol Park for more information.