after a federal census is taken, California is divided geographically into 80 Assembly districts, with a layer of 40 Senatorial districts laid on top. This gives each of our 38 million residents one representative in the Assembly and one in the Senate.

To find out what Assembly Member and Senator represent you and the area of California in which you live, click on Find Your Representative By Address. There you can find contact information for each representative.

To see a map of California showing the boundaries of the Senate and Assembly districts, click on District Map Search. You’ll notice that the districts in the San Francisco Bay, Sacramento, Los Angeles, and San Diego areas are quite small, having a higher population density than rural California, where districts sometimes include several counties in their entirety! However, with approximately the same number of Californians in each Assembly and Senate district, no one’s vote or voice is more important than another’s.

Find Your Representative By 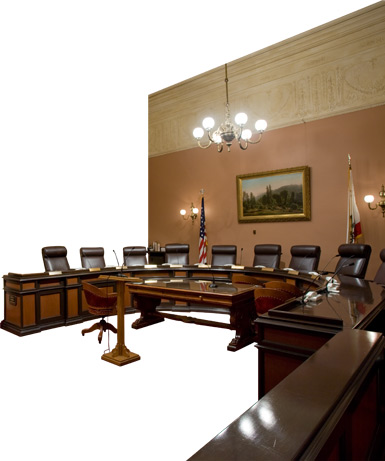 According to the California Secretary of State, in the June 2014 primary elections, only 25.17% of registered voters and 18.44% of those eligible to vote bothered to cast a ballot, the lowest percentage in any special, primary, or general statewide election in nearly a century.

How can you become a more informed citizen and participant in the democratic process? Here you can find more information about several of California’s elected and appointed public officials and their responsibilities, the three branches of government and the accompanying system of checks and balances, how you can participate in the political process, and the life cycle of a bill, from being one of your ideas to becoming a law and being chaptered by the Secretary of State. Not registered to vote? You still have a voice and can influence California’s future with the help of the information found here.

A little over 38 million people call California home. With 80 Assembly Members, each represents around 475,000 Californians, and each of the 40 Senators represents nearly 1 million people. California has the largest population of any state, but one of the smallest state legislatures. The Legislature, however, began life in 1849 with only 16 Senators and 36 Assembly Members. Half of each house came from the mining districts of Sacramento and San Joaquin! Today, however, most representatives come from the San Francisco Bay Area, Los Angeles, and San Diego, where our state’s population is concentrated.

Another indicator of the influence of the Gold Rush influx on California was that none (so far as we know) of the first Assembly Members were from California, and only two Senators were born in the Golden State! Today, a far greater percentage of native Californians serve in the Legislature, but there are still many from other states and several from other countries. Nor are they all attorneys in their private lives or full-time legislators: We have engineers, business owners, doctors, educators, military reservists, farmers and ranchers, and even a 911 dispatcher!

As head of the executive branch of state government, the Governor is vested with the supreme executive power of the State of California and has the duty to ensure that the laws of the state are faithfully executed. Thirty-eight different men have served as governors of California, beginning with Peter Burnett, who was elected in 1849, nearly a year before California was admitted as a state!

While some of our chief executives are well-known, such as Earl Warren, Ronald Reagan, and Arnold Schwarzenegger, other governors led interesting lives, both within and out of the Capitol. Did you know that Milton Latham served only five days as governor in 1860? Until Austrian-born Schwarzenegger was sworn into office in 2003, John Downey was the only governor to have been born outside of the United States, in Ireland in 1827.

Although better known for his role in the construction of the Transcontinental Railroad, Leland Stanford (pictured above) was also governor. And did you know that Romualdo Pacheco, the twelfth governor, was not only the first governor to have been born in California, but the only governor to have claimed to have lassoed a grizzly bear?

More than just the governors’ wives, California's first ladies have made important contributions to the state and its people. Maria Downey (John) felt that one of her duties as First Lady was to help the less fortunate. Jane Stanford, pictured at left, with her husband Leland founded Leland Stanford Junior University in memory of their beloved son, and she oversaw the University’s operations until her death in 1905. In 1900, she donated the Stanford Mansion in Sacramento to the Catholic Diocese of Sacramento for the “nurture, care and maintenance of homeless children.”

Mary Pacheco (Romualdo) was an engaging conversationalist and was known for holding some of the best literary salons in San Francisco and Sacramento. Nina Warren (Earl) made it a point to cook meals for needy families. Gloria Deukmejian (George) organized a statewide awards program to recognize outstanding volunteer achievement for Volunteer Centers of California. Gayle Wilson (Pete) first established an office for the First Lady in the Capitol where she worked on early health and math/science education issues. Sharon Davis (Gray) created the Governor’s Book Fund to provide grants to school libraries. Maria Shriver (Arnold Schwarzenegger) was instrumental in creating the California Museum for History, Women, and the Arts.

Learn more about the First

California often sets the pace for the nation in regards to lawmaking, and its laws are sometimes used as models by the United States Congress. Especially in the areas of civil rights and environmental protection, California’s laws are at the forefront and regularly include stricter requirements than their federal counterparts. In 1911, California was the sixth state to give women the vote. That progressive year also saw widespread labor reform as well as the recall, initiative, and referendum. The recall allows the people to remove elected officials from office before their term is expired: Not even the governor is exempt.

The Porter-Cologne Water Quality Control Act was adopted in 1969 as one of the nation’s strongest anti-pollution laws and became a model for the federal Clean Water Act of 1972. The Motor Vehicle Pollution Control Act of 1960 was the first of its kind in the country and contained stricter standards than national laws. The 1959 Fair Employment Practices Act, years ahead of the similar U.S. Civil Rights Act of 1964, was followed by laws to prohibit job and/or housing discrimination based on marital status, pregnancy, and sexual orientation, and to prohibit sexual harassment on the job.

Learn more about our historic